Fill out the following information and your content will be emailed to you at the address that you provide.

How to Survive a Jerk at Work

Many employees have to deal with colleagues and bosses who are rude or abusive. Here are some techniques to make things a little easier.

For many people, going to work every day can be hard enough. When they have to deal with a jerk in the office, it can be unbearable.

Bad behavior is also contagious. Trevor Foulk and his colleagues from the University of Florida found a single exposure to a rude person (say, an insulting email from a customer) turns targeted people into “carriers” who then infect others. As they put it, rudeness spreads much “like the common cold.” (Dr. Foulk is now an assistant professor of management at the University of Maryland.)

Battling bullies, though, is risky business. It’s upsetting and time-consuming, and even if you are confident of victory, the jerks might be stronger than you think. The new human-resources chief of a large company once bragged to me that she was firing the firm’s most abusive senior executives. She assured me that the CEO was in her corner and she had a mandate to sack them. She was wrong. The jerks went to the CEO and persuaded him they were less expendable than she was—and she was canned a few weeks later.

At the same time, it may be equally hard for people to escape toxic workplaces. Some stay because their work is so fulfilling that it seems worth it to endure the haters. For others, the grass is even browner elsewhere: Their only options are jobs that pay far less or at places where the incivility is worse. For still others, an abrupt or early departure would do irreparable harm to their careers.

So, what’s an employee to do? Plenty, as it turns out. While jerks take a toll on everyone, there are ways to reduce the onslaught and suffering. Here are a handful of techniques, based on academic studies and thousands of email exchanges and conversations I’ve had over the years with people who deal with rudeness, disrespect and backstabbing at work.

Keep your distance. Sometimes the most obvious solution is the best: Stay away from the offending person, limiting the frequency, duration and intensity of toxic encounters. 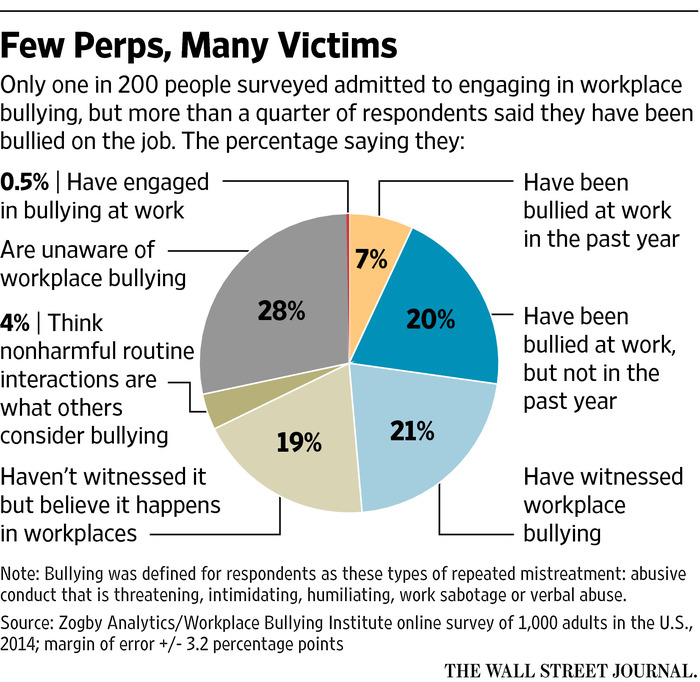 Recent research further shows the dangers of getting too close to a jerk. From 2013 to 2015, Michael Housman, then chief analytics officer at Cornerstone OnDemand, and Dylan Minor, an assistant professor at Northwestern University’s Kellogg School of Management, tracked 2,000 workers at a technology company and found that toxic behavior was “contagious.” If a toxic worker sits near you, they concluded, your chances of behaving in a toxic way rises by one and half times. They also found that people who sat within 25 feet of a toxic employee were twice as likely to leave the company as employees who sat further away from the local jerks.

Slow down. Slowing the rhythm of interactions is another useful technique. Many abusive people take pleasure in their targets’ pain. When they provoke visible reactions from targets—tears, anger, kissing up, effusive apologies, or writing a long email in response to their imaginary emergency—the pleasure centers in their twisted minds light up.

Don’t give the bully that pleasure. Instead, respond as slowly and infrequently to the jerk as possible, and when you do respond, stay as calm and composed as you can. That way, your tormentor is denied reinforcement. This method reduces how often abuse occurs and helps you predict and control when it happens.

I learned this technique from a doctoral student who had a rude and temperamental adviser. At first, when the adviser sent the student demeaning emails, or called at 2 a.m. to give her grief, the student answered right away. This fueled further abuse because he got the instant reinforcement that he craved. The student learned to respond more and more slowly, first waiting hours, then days, and sometimes weeks. Over time, the abuse persisted, but to a much lesser degree. That student is now a tenured professor at a prestigious university—and believes she wouldn’t have stayed sane or finished her Ph.D. without this technique.

Early-warning systems. In many workplaces, people spread warnings when powerful jerks are in vile moods (and it is best to avoid them) or are “incoming.” Real life sometimes resembles a scene from “The Proposal,” a 2009 film in which Sandra Bullock plays a cruel New York book editor. As she approaches the office, her assistant emails his colleagues “THE WITCH IS ON HER BROOM.” In an instant, the gossiping and eating stops, people scurry back to their cubicles, and each pretends to be doing something productive.

Look at it another way. Another category of survival methods entails “reframing” the jerk’s behavior in a more positive and less threatening light. This strategy is akin to how cognitive behavioral therapists help patients construe their difficulties and concerns as less upsetting, or even good things. Among the reframing techniques I’ve observed: telling yourself you aren’t to blame (“she’s just a jerk doing what jerks do”), playing down the threat (“this is a small matter”), focusing on the silver lining (“sure, my boss is a jerk, but she’s taught me so much”), and rising above it (in Michelle Obama’s words, “when they go low, we go high”).

Imaginary time travel is another simple and effective reframing technique. Emma Bruehlman-Senecal, a postdoctoral researcher at the University of California, Berkeley, and Ozlem Ayduk, a professor of psychology at the university, studied how people dealt with rough patches such as poor performance on an exam or the end of a long-term relationship. When people framed current troubles in terms of how they would feel about them in the distant future (rather than the near future), they experienced less anxiety, anger, sadness and guilt in the present.

Similarly, targets of workplace bullying can tell themselves “this too shall pass,” and imagine it is hours, days or years later and the sting is gone. That’s how one U.S. Air Force Academy cadet survived the traditional hazing during his freshman year. He wrote me that when upperclassmen berated him, he imagined it was a few years later, he was flying a plane, and the temporary torment was a small price for living his dream of becoming a pilot. And that’s what happened.

Protective reframing is also achieved via emotional detachment—defining your predicament in ways that help you tune out, feel indifferent or become emotionally distant from the jerks. When one university administrator I know encounters a mean or condescending colleague, he pretends to be a doctor who specializes in diagnosing intriguing, rare and extreme cases of “jerkism.” He tells himself how lucky he is to find such a “fascinating case,” which prevents him from getting mad or feeling hurt.

From enemy to friend. Finally, there’s the technique than may be the most effective one of all: Turn your tormentor into a friend. As psychologist Robert Cialdini documents in his classic book “Influence,” flattery, smiles and other signs of appreciation (even if not entirely sincere) can win over strangers, critics and enemies. 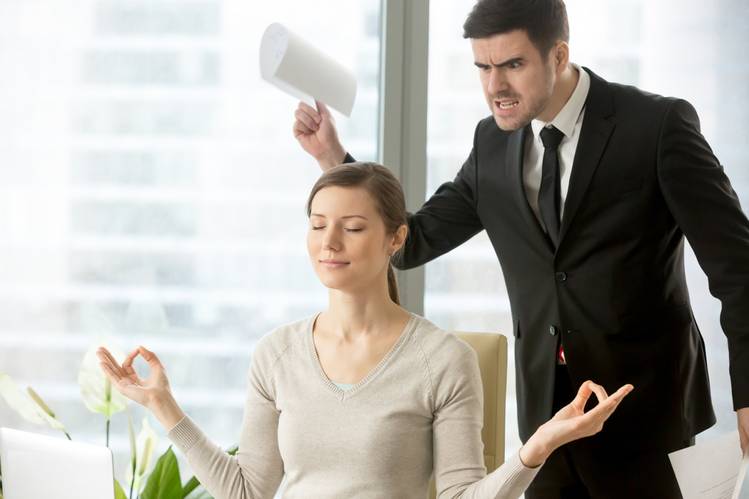 Successful strategies for dealing with a nasty boss or colleague include limiting contact and taking the long view.

Another way to make friends is to get the jerk to do you favors. In “You are Now Less Dumb,” David McRaney dubs this “the Benjamin Franklin effect.” When Franklin was a young man struggling to overcome his modest means and lack of formal education, a wealthy peer gave a speech attacking his actions and motives.

Franklin was furious, but didn’t fire back. Instead, he wrote his critic and asked to borrow a “very scarce and curious book” from his library. The man sent the book, and Franklin later returned it with a warm thank-you note. In Franklin’s words, this man “ever after manifested a readiness to serve me on all occasions, so that we became great friends, and our friendship continued to his death.” Mr. McRaney explains he turned “his hater into a fan” because, as many experiments show, “we grow to like people for whom we do nice things and dislike those to whom we are unkind.”

Look in the mirror. One last, perhaps painful point: If you are a jerk, it won’t be easy to admit it to yourself or others. We humans have a penchant for denial and delusion. As a result, we need to see how others see us—even when it hurts. We need people who know us and won’t sugarcoat the truth, and to accept their candid feedback.

According to the U.S. Workplace Bullying Survey, nearly half of respondents report they’ve been bullied or witnessed others doing it; less than 1% admit to being perpetrators.

In other words, there are a lot of jerks out there who aren’t confessing their sins. And you might be one of them.

Dr. Sutton is a professor of management science at Stanford University and author of “The Asshole Survival Guide: How to Deal With People Who Treat You Like Dirt,” to be published in September. This piece is based on that book. He can be reached at reports@wsj.com.

Comment on How to Survive a Jerk at Work