Fill out the following information and your content will be emailed to you at the address that you provide.

Use Your Seat to Get Ahead at Work

Sitting next to a star improves your performance, research shows; finally, something to like about open offices

Want to boost your performance at work?

Pick out a colleague who is really good in an area where you want to improve—and move your desk next to him or her.

Proximity to high achievers can lift people’s performance in various jobs, via inspiration, peer pressure or new learning, a growing body of research shows. The findings offer a silver lining to anyone annoyed at the current fad of flexible office-seating arrangements; employees can use them to their advantage.

Simply sitting next to a high achiever can improve someone’s performance by 3% to 16%, according to a two-year Northwestern University study of 2,452 help-desk and other client-service workers at a technology company.

‘You can pretty quickly figure out who’s got the extra juice, or the greatest insight. People are drawn to it. You can almost see the pathways on the floor.’

The study is the first to tease apart different aspects of performance in an office job and analyze spillover in each. Productive employees—those who finished tasks quickly—raised the output of slower colleagues by 8%. Effective employees, who could handle customers’ problems without referring them to co-workers to finish, lifted their neighbors’ effectiveness by 16%. Quality workers, who received high ratings on customer surveys, inspired 3% improvements in colleagues’ quality ratings, says the study, published last year by the Harvard Business School. Researchers analyzed data from personnel files, seating-arrangement reports, task-tracking software and customer-satisfaction surveys in several U.S. and European offices of the company.

Lead author Dylan Minor sees a combination of inspiration and peer pressure at work. He compares it to the impact of a charismatic leader. Also, high performers weren’t dragged down by low achievers nearby, says Dr. Minor, an assistant professor of managerial economics at Northwestern University’s Kellogg School.

For skills that have no upper limits, such as creativity, sitting elbow-to-elbow with a star may spark bigger gains, Dr. Minor says. People who are working from home or on the road might find a Starbucks and surround themselves with caffeinated high achievers.

When Hoon Oh was hired last year as a creative director in the Philadelphia offices of the ad agency Allen & Gerritsen, “we started riffing off each other’s thinking” right away, says Hilary Sedgwick, who is also a creative director. Mr. Oh and Ms. Sedgwick were seated across the office at first but soon slid their desks together. Their boss Jennifer Putnam, chief creative officer for the Boston-based agency, says both are passionate about their work, and “they’re teaching that to each other and teaching that to the team.”

Jobvite, a San Mateo, Calif., recruiting-software company, often seats new employees next to a high achiever. “It’s a form of orientation,” says CEO Dan Finnigan. He has noticed engineers gravitating toward their strongest co-workers, or those with the freshest skills. “You can pretty quickly figure out who’s got the extra juice, or the greatest insight. People are drawn to it. You can almost see the pathways on the floor,” Mr. Finnigan says.

David Blacker seated a new hire near his desk on a recruiting team he led at a previous employer. Within a month, “I started to hear my words coming out of her mouth” as she built his techniques into her own interviews, says Mr. Blacker, managing principal of Venerate Media Group, a digital-marketing company in Tampa, Fla. 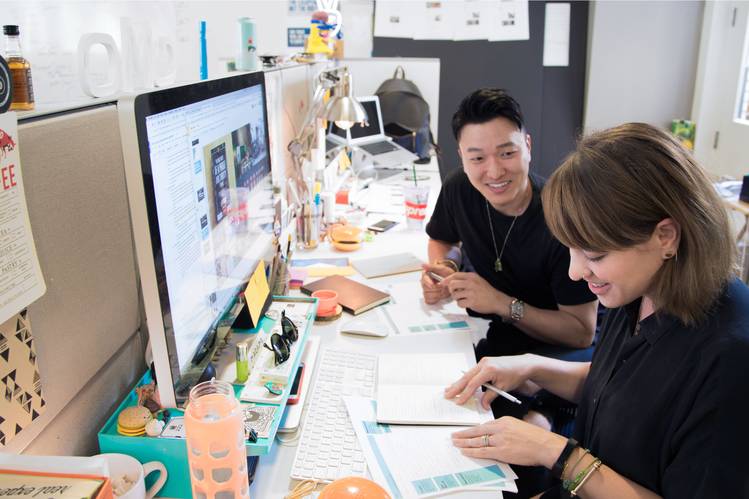 In the Philadelphia offices of ad agency Allen & Gerritsen, creative directors Hoon Oh and Hilary Sedgwick slid their desks together and say it helps both of them come up with creative ideas. PHOTO: JESSI THORNE

Weak teachers whose colleagues teaching the same grade in the same school were highly skilled posted sharper gains in students’ math and reading test scores, compared with those surrounded by weaker colleagues, says a 2009 study of 11 years of test data on third- and fifth-grade students and teachers at 1,545 North Carolina schools. The weak teachers may have learned by watching their peers, or been inspired by them to get more training, the study says.

Newcomers to a high-performing team also can pick up good work habits, such as meeting deadlines and listening carefully, says Marc Landsberg, CEO of the Chicago social media agency Social Deviant. When teammates’ cubicles adjoin each other, “those pods take on tribal effects” that can have a big impact, positive or negative, on the whole team, he says.

There are some catches. In sales, people can benefit from being teamed with star performers, says a 2014 study at Washington University in St. Louis —but only if their pay is based on overall team performance. When top salespeople at department-store cosmetics counters were paid based on their team’s results, they helped less-skilled teammates by handing off loyal customers and turning their skills to luring new clients. Low performers suffered when pay was based on individual sales, however: Stars kept loyal customers for themselves and discounted prices to pump up their own sales.

Working under a colleague’s watchful eye can​be especially potent. Supermarket cashiers who worked where star co-workers could see them posted performance gains, says a 2009 study of 370 cashiers in six stores. They may have been afraid their high-performing colleagues would ostracize them or report them to the boss, or they may simply have wanted to be liked, according to the two-year study, which was led by Alexandre Mas, a professor of economics and public affairs at Princeton University.

Share Use Your Seat to Get Ahead at Work

Comment on Use Your Seat to Get Ahead at Work